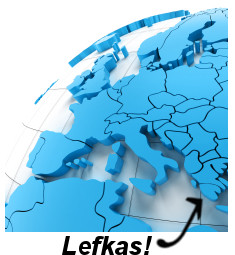 The Greek Island of Lefkas, also known as Lefkada or Levkas, is one of the "Eptanisa" or seven-islands in the Ionian Sea. As well as Lefkas, the islands of Eptanisa are made-up of Zakinthos, Kefalonia, Kerkyra, Paxi, Kythera and Ithaki. Lefkas is the fourth largest Greek Island: with Zakynthos, Kefalonia and Corfu being the largest three. The island's captial city is calls Lefkada, with the island being access from mainland Greece by a narrow canal. There is a bridge at the north of the island which connects Lefkas with the mainland. There are a selection of smaller islands surrounding Lefkas, which include Meganisi, Kastos, Kalamos, Madouri and Skorpios.

This island has an area of 300 square kilometres, with a coast of 117 kilometres. Lefkas has many beautiful beaches, spectacular mountains, clean sea, amazing waterfalls, and a rich culture.

Lefkas has a Mediterranean climate with hot summers and cool winters. The hot temperatures start in May and continue through until October. The hottest months are July and August with average temperatures of 25°C.

Choose your holiday villa on Lefkas